SMASH THE SYSTEM is a game where you play as characters who sneak into the domain of the corporate oligarchs, discover conspiracies, sabotage the machinery, steal files, and eventually bring the whole thing crashing down.

You also stack dice carefully before smacking them around your room.

To Play, you will need:

In order to download this ttrpg you must purchase it at or above the minimum price of $5 USD. You will get access to the following files:

Smash The System is a game about corporate sabotage, and it's flexible enough that you could use it to run anything from Leverage to Shadowrun to Payday.

Smash is 7 pages long, with a definite zine sort of feeling to the layout, and it's easy to read.

Mechanically, it's got a simple dice system, but one that's sort of viscerally fun. When a roll is called for, you instead stack dice on top of each other. If the tower collapses, any of the fallen dice that roll 1s escalate your situation. If you do something to deescalate the danger in your environment, you can reset your tower down to a couple dice. On the other hand, if you want to do serious damage to your environment, everyone can send their towers flying and deal infrastructure damage equal to the number of 6s this rolls.

Character creation has some pretty decent crunch for how short the system is, and notably there aren't any combat skills you can take. You avoid danger and you damage property, but you don't fight people. There *is* character progression, though, and it's easy to bolt on some mechanics if you want to add takedowns and combat to your game.

There's also a really neat procedural generation engine for the locations you're intruding into, and a guard alert system, and a guard AI. For GMing-on-the-fly people, or for folks who want to add any of those things to their home game as a minigame, it might be worth buying Smash for those alone.

Finally, there's some building-dice-towers-under-time-pressure mechanics, where are essential to the group's exfiltration. The game doesn't really provide an alternative here, but theoretically you could replace all of the dice-stacking with rolls if the physical mechanics are an issue.

Overall, Smash The System is a heck of a game. It orbits its core mechanic around something that's naturally fun and engaging, it builds suspense as it plays, and there is a literal crash of action at all the important beats in the plot.

Smash is as tight as stuff like Dread, it's quick to set up and play, and it's got a bunch of elements you can just pop out and use elsewhere. I would absolutely recommend grabbing a copy if you can.

I would say three to five, including GM.

An original system which is a perfect fit for the types of games Smash the System aims for: games about finesse, stealth, careful planning and, of course, bringing it all down with a bang. A very nice little game! 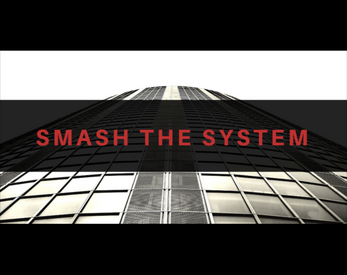